Welcome to my shop! Everything is handmade with love. Treat yourself! 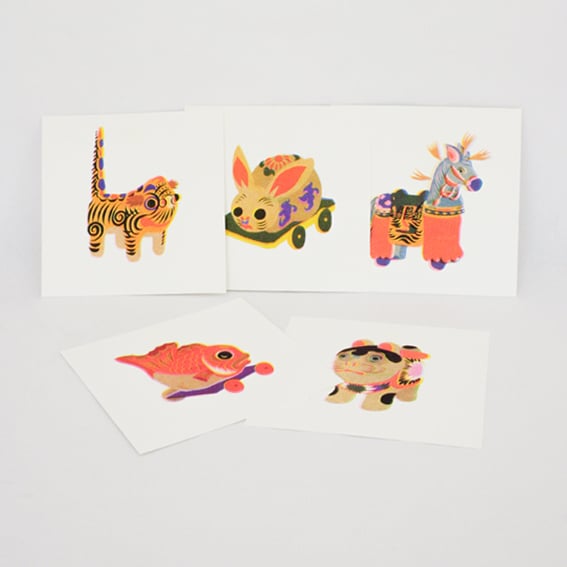 A set of 5 riso prints (4 colors) / square size: 16x16cm
Printed in Spain by Sonriso studio on Fedrigoni, Arena Rough Blanco Natural paper, 300 gr. Each print is slightly different due to the Riso technique which makes each print unique. Pictures by Sonriso studio.

Also available as a pack of 5 Stickers

A new collection dedicated to my newborn son, five amulets or toys from the Edo era (1600-1868). When I was pregnant we would often talk about Japan with his dad and how much we would like to travel back there with him this year. This is not going to happen as we planned but we are definitely going to take him to this magical country someday.

Here are a bit more informations about these little guys and their folklore:

This lovely little papier-mâché dog is a traditional symbol of protection in Japan. Since the Edo era, the dog has been seen as the protector of the house and the people who live there. This small figurine is offered to children but also to pregnant women to bring them luck and protection.

The Hariko no Tora is a Japanese papier-mâché toy made from washi whose head swings when touched by a finger. There are many different kinds of Hariko in different parts of Japan. In the Osaka region, the Hariko takes the form of a tiger. It is believed to have the power to keep away evil spirits and prevent disease, it is also known as a lucky charm for victory.

The Tai guruma is a traditional Japanese sea bream-shaped toy or lantern on wheels. It takes its origins in the Maki district of Niigata town during the Edo period. It was a traditional toy that children took with them when visiting ancestral graves.

The Tama usagi hariko is a papier-mâché good luck rabbit doll. The white rabbit doll is a traditional toy made in Fukushima since the Edo era and is well liked for its roundness. It is made in traditional hand craft work and painted by local folk artist.

This horse figurine is a traditional local toy with a history of over 700 years. Yawata Uma horses were traditionally made by farmers to bring good luck and are painted to reflect the way real horses were decorated for rural weddings. They are often given as mementos of celebrations such as weddings and new buildings.